An Encounter With Satan

The plastic netting I had wrapped around my flowers
to keep off the deer had become a snare
a snake is now caught and tangled and twisted
its black skin rubbed raw and white.
I wondered why I should care what God had cursed
and I felt fear.
I protected my hand with heavy, thick plastic gloves,
the type used to protect human flesh from toxic spills
and tentatively touched the snake
which wriggled out of my hand, tried to bite my hand
it's mouth wide open, its long curled body rolling
and wriggling until it could move no more.
I grabbed the snake, I held the snake, and with a pair
of kitchen scissors proceeded to cut away the netting
the snake so strong and muscular I could feel it vibrating
through the thickness of the glove my heart beating
I as frightened of the wounded snake as it was of me
cutting away the snare from the snake
pushing the scissors into the skin
of the snake to cut away the netting
that was tearing into its skin of the snake
finally freeing the snake.
I free the snake
but still I held it in my hand
fearing to release it
fearing it would attack me
who had snared it
abused it
and finally freed it. 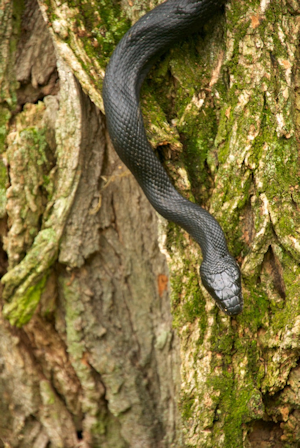